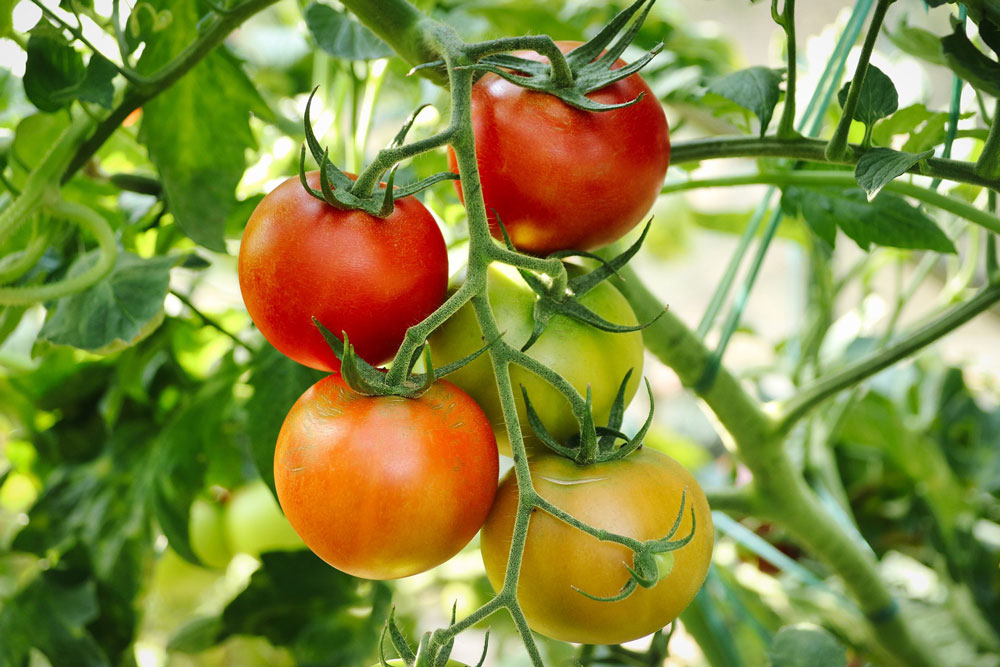 When growing tomatoes and reading about them—on our website, store signs, and plant tags—you eventually encounter a lot of tomato growing terms. Determinate and indeterminate. Hybrid and heirloom. VFNT and SWV. What does all this mean?

When selecting tomato varieties, you must choose between plants with different types of growth habits called determinate or indeterminate. All tomatoes are either one or the other.

Determinate varieties (including bush varieties) reach a certain plant height and then stop growing. The majority of their fruit matures within a month or two and appears at the ends of the branches. These are popular with gardeners who like to can, make sauce, or have another reason for wanting most of their tomatoes at once. It might even be that you’d prefer to harvest early and leave late summer for a long vacation.

Most determinate varieties need a cage, but there are some very stocky varieties, such as Better Bush, that have a very sturdy main stems; they don’t need much support, just a stake to keep them from toppling in wind and rain. Varieties especially suited to growing in pots, such as Patio and Better Bush, are determinate. Little or no pruning is needed.

Indeterminate varieties continue to grow and produce tomatoes all along the stems throughout the growing season. Indeterminate plants need extra-tall supports of at least 5 feet. Because indeterminate varieties throw out so many shoots, gardeners often prune them for optimum-sized fruit or train them on a very tall trellis. However, if you don’t prune, no harm done! You may have seen photos of 10- or 15-foot tomato vines. These are definitely indeterminate types.

Most gardeners grow both types, determinate for large harvests for canning and freezing and indeterminate to get fruit for salads and sandwiches throughout the growing season.

A few varieties are called semi-determinate or compact indeterminate because they are somewhere in between. For best results, give them support.